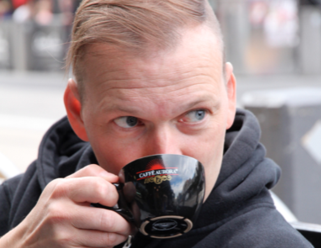 Born the son of traveling gypsies Eric Amber spent his early life observing the tricks and scams of the Carnival until his parents gave up the vagabond lifestyle for the boring, [but honest] furniture business.

As a teen, Eric discovered improv comedy at the world famous Loose Moose Theatre in Calgary which led him to the life of street performing and playwriting. First in a trio known as The 3 Canadians. Later, in the vaudeville comedy duo Hot Nuts and Popcorn.

After years of performing and traveling, Eric moved to Montreal to build and found Theatre Sainte Catherine, where he taught Improvisation to a new generation of artists and comedians.

In 2009, Eric courted controversy in what would become known as the ‘Go Fuck Yourself’ media frenzy. An event that would free Eric from the theatre business and propel him into writing and film making.